The mergers and acquisitions (M&A) industry experienced a robust, record-breaking year in 2021. The total global deal value has reached $5 trillion, and the deal values in the United States surged to $2.6 trillion. While 2022 hasn’t hit those records, we saw significant growth during the second quarter of 2022 compared to the first quarter. The market is currently on track to be its second-biggest year ever, and we can expect to see more activity related to representation and warranties insurance (RWI) deals.

Euclid Transactional, a trusted underwriter of transactional insurance, analyzed the number of global RWI policy submissions and policies bound and developed an industry report summarizing their findings. Here is a snapshot of what we’ve seen so far, as well as some trends of what’s yet to come. 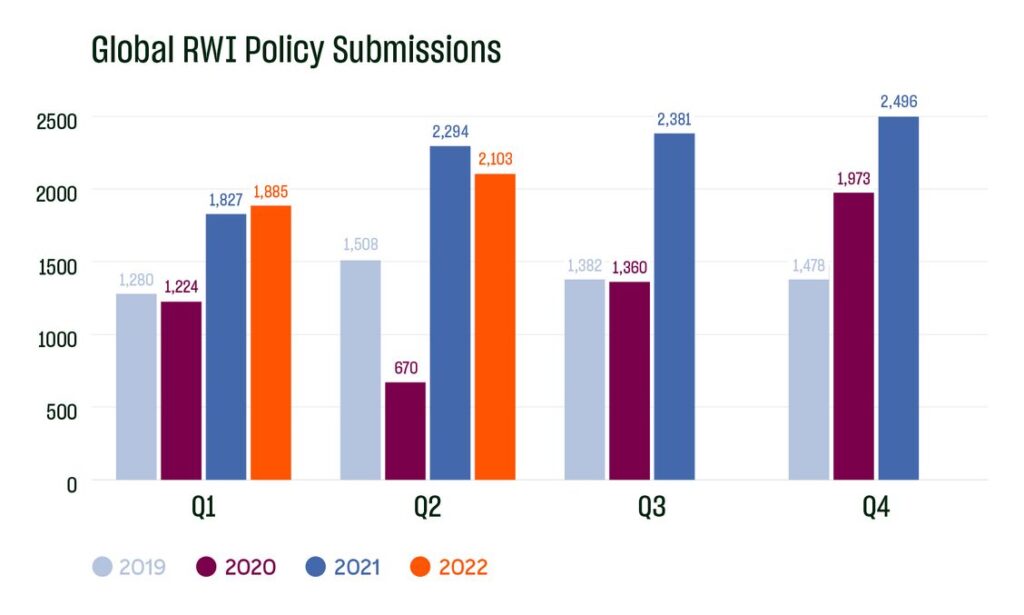 As far as volume goes, the data from 2022 isn’t quite as high as it was in the previous year, but it has grown since the first quarter and has trended much higher than all of the previous years. This is likely due to the fact that RWI has become even more critical to the transaction process, particularly as transaction volume is impacted by external forces such as rising interest rates and geopolitical issues. Additionally, bound policies continue to increase slightly, showing commitment from buyers and sellers to move forward with coverage once underwriting takes place.

Rates continue to fluctuate so far in 2022 but are generally trending lower, given the additional capacity in the market. Rates historically range anywhere from 2.5 percent to 7 percent of a policy limit depending on the industry, size of the transaction, quality of diligence, etc. In 2021, we saw rates slightly increase with averages closer to 5 percent, largely driven by capacity in the RWI market. Experts anticipate rates stabilizing anywhere from 3.5 to 4 percent for most sectors in late 2022. We also saw a rise in claims notification activity in 2022, which was likely driven by the increase in volume from 2021. Claims are filed on approximately 20 percent of all RWI policies, and the majority take place within the first 18 months of the policy term.  Right now, we are halfway to determining the impact of 2021’s volume. Claims data from 2019 reveals that the most common categories continue to be financial statements, tax, legal compliance and material contracts. Additional common claims in 2022 based on discussions with the RWI market include intellectual property, condition of assets, customers and supply chain.

What Can We Expect for the Future?

RWI underwriting continues to focus on material contracts, quality of financials, customer and supplier concentration, inventory and environmental concerns. We are seeing a surge in secondary deals (particularly fund-to-fund transfers) seeking and obtaining RWI coverage. RWI is increasingly obtained for smaller EV transactions as new market entrants emerge and established providers decrease minimums. If the rate of usage in secondary deals continues to grow, this will lead to a rise in submissions. This would lead to more underwriters jumping on the bandwagon, which could lead to more competitive pricing for RWI buyers.

With interest rates rising, M&A activity shows no sign of slowing down in the near future. The R&W market typically sees an increase in demand during the second half of the year, and Euclid believes this could happen again as clients look to deploy the substantial capital at their disposal before the end of the fiscal year. There are many complications that buyers face, including but not limited to inflation, supply chain disruptions, struggles with talent retention and increased wages. We’ve already seen interest rates slightly increase this year, and the Federal Reserve has stated that we could potentially see more of this in the near future.

It is also important to consider geopolitical tensions – particularly the ongoing war in Ukraine, which has caused interest rates to be put on the back burner. It is difficult for us to predict the impact this war will have on deal-making and our economic future since it is impossible to determine when it will end. But it is important to stay posted on the latest updates and remain optimistic that the war will end before it has long-lasting effects on the economy.

Because of the current state of the market, it is crucial to work with an insurance broker who specializes in your line of coverage and is up-to-date on the latest compliance standards. For more risk management guidance, reach out to a member of The Horton Group’s M&A team to schedule a consultation. Horton’s M&A Team provides transformative growth for private equity funds, independent sponsors and strategic acquirers. Learn more online at www.thehortongroup.com/mergers.

Q3 Reps & Warranties Update from The Horton Group on Vimeo.

Mike is also an attorney, and studied law at night while working as an insurance consultant. “People ask me what law school is like; ultimately, it is countless hours reading thousands of cases about every situation that could go wrong.”